Yoga in Relation to Panchakosha

Yoga in Relation to Panchakosha 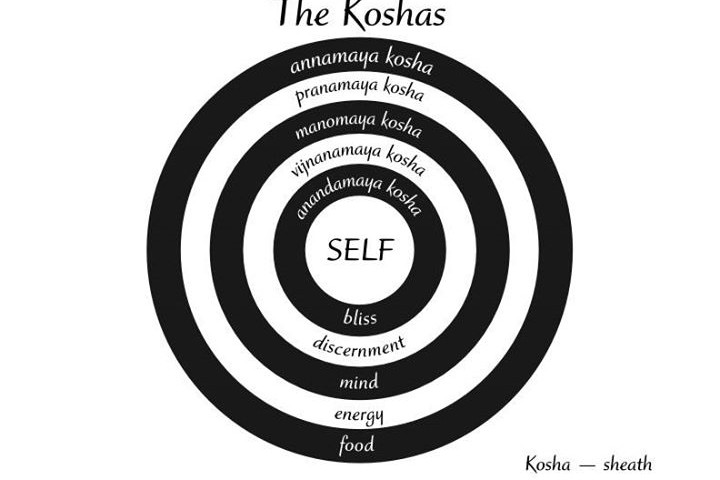 The purpose of this article is to explain the relationship of ashtanga yoga and hatha yoga as described by Patanjali in relation to panchakosha. My intention is to explain to you how they come together and to give you example of my understanding regarding their relationship.

First, I would like to explain what panchakosha is. “Pancha” means 5 and “kosha” means bodies or vehicles of consciousness. This figure provides you with a visual representation for clear understanding:

The yogis are telling us that the human being has 5 bodies, which out of these 5 we are familiar with the physical body. Because of the lack of education and lack of spirituality in schools we are not aware of the other 4 bodies. Most of us are only conscious of the physical body.

With this being said, the first layer is annamaya kosha and this layer is related to the physical body. The study of anatomy learned in the yoga program helped me understand the physical body.  This is also referred to as the food body. This body is dependent upon food, water, and air to survive. In order to keep this body in good health asana and shatkarma  (includes 6 cleansing techniques) practice are required . In Yoga we can balance the restlessness of the body through the practice of asanas.

In order to bring health in annamaya kosha it is required to align the posture and to regulate the food intake. When it comes to food is all about quantity. If we eat too much food the body does not know what to do with this food and struggles by using a lot of energy to digest it. But it is not only about the quantity, the awareness and the attitude in which we eat is very important here. If we eat fast or while doing something else (ex: watching TV) and without awareness we develop a bad relationship with Nature. I have personally start my meals with a small prayer thanking the Divine Consciousness for the food and asking for help to take the prana from the food and turn it into actions of love and compassion and ask for help in my spiritual evolution.

The second layer is pranamaya kosha is the bio-energetic body, the pranic body. The vital energy is located here. At this level we need the prana to be rhythmic and in harmony with the physical body otherwise diseases start to occur.

Maha prana is the cosmic energy and if this level of consciousness is aligned then this cosmic energy is received and total well-being is facilitated. There are 5 types of energies referred to as pancha prana. Prana is the inward energy regulated by the inward movement. In this category we include inhalation, food intake, etc. All that is moving outward is called apana (ex: elimination of waste, excretion). Samana is related to metabolism, digestion, absorption and assimilation. If thi is imbalance there will be problems in the digestive system.  Udana governs the nervous and the sensory systems. If udana is imbalanced, there will be problems in the nervous system. Vyana is the fith energy and this is in charge of the circulation.

All these can be regulated and kept in balance through the practice of pranayama. According to Bhagavad-Gītā As It Is, prāṇāyām is translated to “trance induced by stopping all breathing”, also being made from the two separate Sanskrit words, prāṇ and āyām.

The way a person breaths can tell us a lot about that person. For instance, irregularities in breath, chest breathing and jerks in breathing are directly related with stress and with the presence of many thoughts in someone’s mind. If one breaths using the diaphragm (belly breathing) it shows that person is relaxed or if one uses the interscostal muscles (external and internal) and also using the trunk and the shoulder girdle (being chest breathing which culminates with mouth breahing), then the person is under stress.  Irregular and fast breathing patterns shows that a person is under physical or mental pain, and deep in the subconscious mind there is sadness. Irregular breathing is fixed and/or regulated through regular practice of pranayama. Pranayama will teach one to slow down the breathing pace.

There are over  50 particular Pranayama techniques and forms, these include:

The mastery and understanding of annamaya kosha and pranamaya kosha are prerequisites to a spiritual aspirant growth and development. If these two layers are not controlled than it is near to impossible to achieve the higher states of consciousness in spirituality located at the other higher. Because of this, Hatha Yoga has many practices designed to discipline, vitalize, and control these two bodies, including the asanas (yoga postures), pranayama (breathing techniques) and kriya (purification practice).

The third is the Manomaya kosha (the mental body). This mental layer is responsible for regulating all thoughts and actions within the human being. It also acts as a mediator between the more material koshas (pranamaya and annamaya) and the elementally subtle koshas (vijnanamaya and anadamaya).  This kosha posses much more freedom than the first two koshas because  it has the ability to transfer through past, present and future without the movement through time and space.  This body is regulated by Yama and Niyama and Pratyahara. These are described by Patanjali in the Yoga Sutras. Based on Patanjali, the evolution of yoga can occur in 8 stages, 8 limbs.  This eight-fold path offers guidelines for a meaningful and purposeful life.  the eightfold path is called ashtanga, which literally means “eight limbs” (ashta=eight, anga=limb). These eight steps basically act as guidelines on how to live a meaningful and purposeful life.  Each limb is described below:

1. Yama – refers to the five abstentions: how we relate to the external world. These are universal practices that relate best to what we know as the Golden Rule, “Do unto others as you would have them do unto you.”

The five yamas are:

This involves the purity of the thoughts and acts, the complete concordance between the way one thinks and the way he acts. It also means continence, abstinence, transmutation and subliming of creative (sexual) potential into spiritual energies, both in men and women.  Essentially, the best control over sexual energies is addressed without stopping the sexual function. Most books define this term as in “chastity in thought, word and deed”, celibacy. The word Brahma means the creator and carya means external act of worship. It means worship of the Creator, “a life of holiness”. In tantra one can learn to separate the orgasm from ejaculation and for women to have implosive orgasms rather than explosive ones and thus not wasting any sexual energy.

Niyama, the second limb, has to do with self-discipline and spiritual observances. Reading spiritual books, practicing asanas, doing tapas, regularly attending temple or church services, saying grace before meals, developing your own personal meditation practices are examples of niyamas in practice.

The five niyamas are:

3. Asana – this talks about postures practiced in yoga

Pratyahara, the fifth limb, means withdrawal of senses from their external objects.

The 6th, 7th and 8th of the limbs will be described below under the other two koshas because they related more to those.

In general in yoga, we learn to take direct action to influence annamaya, pranamaya, and manomaya kosha as these three bodies contain the bulk of our samskaras (past impressions), individualistic perception or ego, and disorders and dysfunctions. They are the bodies that require purification as the other 2 bodies remain, for the most part, inactive or unconscious until the mind is awakened to their nature and reality. It is key to understand that before life can be experienced through the effects of vijnanamaya and anandamaya kosha, the physical, pranic, and mental body must all be balanced and operating in a unified manner.

There are 3 types of granthis:

Hatha yoga can help remove these blockages by regular practice of asana inversions and Jalandhar bandha.

The forth is Vijnanamaya Kosha (the astral body). According to wikipidia, Vijnanamaya kosha is one of the five koshas that cover Atman. Vijnanamaya kosha literally means a shell that is composed of wisdom or intellect. It is the fourth covering of Atma. …

The fifth body is Anandamaya Kosha (the bliss body). According to wikipidia, The Anandamaya kosha or “sheath made of bliss” is in Vedantic philosophy the most subtle or spiritual of the five levels of embodied self. It has been interpreted differently according to specific schools of Indian thought.

The last 3 limbs described by Patanjaly in the yoga stutras are:

This is concentration. Having relieved ourselves of outside distractions, we can now deal with the distractions of the mind itself. No easy task! This is done concentration of the Chitta upon a physical object, such as a flame of a lamp, the midpoint of the eyebrows, or the image of a deity. . Extended periods of concentration naturally lead to meditation. This is directly related to Vijnanamaya Kosha (the astral body)

Meditation or contemplation, the seventh stage of ashtanga, is the uninterrupted flow of concentration. Although concentration (dharana) and meditation (dhyana) may appear to be one and the same, a fine line of distinction exists between these two stages. Where dharana practices one-pointed attention, dhyana is ultimately a state of being keenly aware without focus. At this stage, the mind has been quieted, and in the stillness it produces few or no thoughts at all.

This is bliss, or a state of ecstasy. Here, the meditator merges with his or her point of focus and transcends the Self altogether.

Dhyana and Samadhi lead to Anandamaya Kosha (the bliss body). This is the ultimate freedom from the illusion of the mind, a state of aspiration and evolution for human kind.